It has been a long break between posts, due primarily to the move and settling into the new house, as well as recent travels and planning future travels.
In the course of creating a novel about real people, I've relied on numerous documents written by various people...a few extant letters, receipts, whatever else I can find.
None is as poignant as a last will and testament. Whenever I'm deciphering the curly handwriting in which final bequests were recorded, and translating the legalese, I can't help thinking about the circumstances in which the document was written. The duchess wrote hers during her widowhood, as an elderly woman. In it she refers to "my late most beloved husband."
﻿ 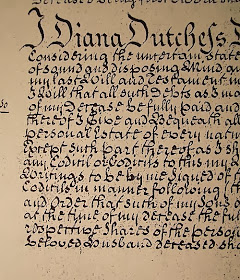 The duke's will was drawn up only a few weeks after his marriage, and days before he headed off to war. He left his possessions and estate to his "dearly beloved wife Diana" as can be seen below. 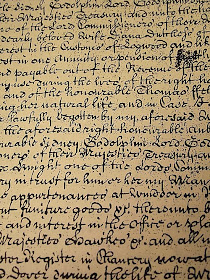 In her case, the will provides details of her jewels, cherished paintings, collections of china and other valuables, and family mementoes, as well as her monetary fortune. In his case, he refers to his sources of income and his "mansion house" in Berkshire.
Whenever I read their lists of bequests, it occurs to me that they had no idea when or where or how their lives would end.
But I do....
﻿ 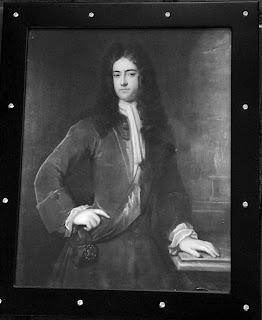 He was born this day 343 years ago, in Lincoln's Inn Fields, the illegitimate son of the King of England and London's favourite actress.

He resided at various other addresses during his lifetime. As I prepare for a move myself, from a country house to a house in a nearby city, I envy him all the household officers and servants who must have overseen the many details involved!

Until I'm settled, blogging will be even more sporadic, I suspect.

Activities connected with my alternate alter ego have been incredibly time consuming this very productive winter. A great deal of snow has kept me mostly at home, indoors, and tied to the computer!

I'm dividing my attention between the 17th and the 18th centuries lately...at Valentine's Day I produced a romance novella set in North Wales and Chester, home to other paternal ancestors (different ones than these.)

I'm hoping to wear 17th century dress for this year's Historical Novel Society conference. Meaning I shall be attempting to devise something resembling a fontange, as worn here by the Queen and the Duchess.

I've already got my vizard!